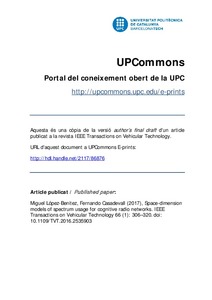 Document typeArticle
Rights accessOpen Access
Abstract
The dynamic spectrum access (DSA) principle, relying on the cognitive radio (CR) paradigm, allows users to access spectrum over time intervals or spatial areas where it remains unused. Due to the opportunistic nature of DSA/CR, the behavior and performance of DSA/CR networks depends on the perceived spectrum usage pattern. An accurate modeling of spectrum occupancy therefore becomes essential in the context of DSA/CR. In this context, this paper addresses the problem of accurately modeling the spectrum occupancy pattern perceived by DSA/CR users in the spatial domain. A novel spatial modeling approach is introduced to enable a simple yet practical and accurate characterization of spectrum. First, a set of models is proposed to characterize and predict the average level of occupancy perceived by DSA/CR users at various locations based on the knowledge of some simple signal parameters. An extension is then proposed to characterize not only the average occupancy level but the instantaneous channel state perceived simultaneously by DSA/CR users observing the same transmitter from different locations as well. The validity and accuracy of the theoretical models are demonstrated with results from an extensive spectrum measurement campaign. Some illustrative examples of their potential applicability are presented and discussed as well.
CitationLópez-Benítez, M., Casadevall, F. Space-dimension models of spectrum usage for cognitive radio networks. "IEEE transactions on vehicular technology", 1 Gener 2017, vol. 66, núm. 1, p. 306-320.
URIhttp://hdl.handle.net/2117/100854
DOI10.1109/TVT.2016.2535903
ISSN0018-9545
Publisher versionhttp://ieeexplore.ieee.org/document/7422155/
Collections
Share: