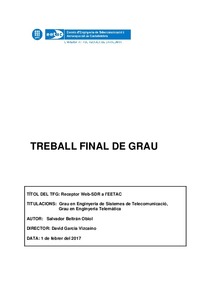 In this project has designed, installed and configured a system of reception of signals of RF using SDR (Software Defined Radio) low cost receivers that by means of a web interface allow to decode the signals to any user of the world, via internet, without the need to have a receptor of radio, this system works to the amateur radio operator (ham) bands and is multiuser. This online receptor contrived for the use in the ham bands but can be also be used in any one other band in function of his configuration, this project is another service that provides the school of telecommunications in order to give visibility around of the world especially between the hams than are the main users of the webSDR systems. The modulations that bears this system sleep: &#9702; AM, FM, LSB, USB, CW To receive the signals have used two receptors SDR (Funcube Dongle Pro +, RTL-SDR)to the bands of 144MHz(2m) VHF and 7MHz (40m) HF and have built two antennas for the two bands. The antenna of VHF (2m) a ground plane and the second antenna for the band of HF (40m) has been a double bazooka antenna. All the system will be supported by a PC, with a Intel Pentium D CPU at 3GHz and 2GB of RAM memory, that we will use as a server. This incorporates all the necessary software loaded in the operating system Ubuntu 14.04LTS lodged under the IP 147.83.115.237 and with two open ports (8072 and 8073) designated to provide access to the information acquired by the different dongles. As added value for this project a BPSK31 signal decoder was designed on Scilab, this functionality is not present on any webSDR program yet.
SubjectsSoftware radio, Wireless communication systems, Ràdio definida per programari, Comunicació sense fil, Sistemes de