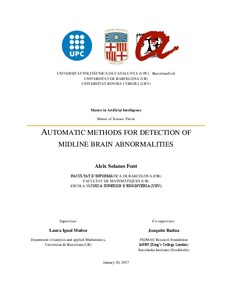 Show full item record
Solanes Font, Aleix
Tutor / directorIgual Muñoz, Laura; Radua, Joaquim
Document typeMaster thesis
Rights accessOpen Access
Abstract
Different studies have demonstrated an augmented prevalence of different midline brain abnormalities in patients with both mood and psychotic disorders. One of these abnormalities is the cavum septum pellucidum (CSP), which occurs when the septum pellucidum fails to fuse. The study of these abnormalities in Magnetic Resonance Imaging requires a tedious and time-consuming process of manually analyzing all the images in order to detect them. It is also problematic when the same abnormality is analyzed manually by different experts because different criteria can be applied. In this context, in would be useful to develop an automatic method for localizing the abnormality and give the measure of its depth. In this project, several methods have been developed by using machine learning and deep learning techniques. To test the proposed approaches, data from of 861 subjects from FIDMAG, have been gathered and processed to use with our algorithms. Among the subjects, 639 are patients with mood or psychotic disorders and 223 are healthy controls. This same dataset was previously used in a study where the authors analyzed the prevalence of this abnormality across the subjects manually, the depth of the abnormality previously reported is finally compared with the results obtained from our automatic methods. The first proposed method implemented is an unsupervised algorithm that segments the abnormality over 2D slices with an accuracy of the 89.72% and a sensitivity of an 84%. Then, a comparison among different Machine Learning classifiers have been conducted along with different dimensionality reduction methods. Between them, K Nearest Neighbors produced the best overall accuracy, with a 99.1% of accuracy and a sensitivity of a 99% by using HOG descriptors to reduce the dimensionality of the data. The last group of methods are different Deep Learning architectures. Three different implementations have been designed, and over the best performing architecture, two different input options to take into account contextual information have been proposed. The best Deep Learning method reached an accuracy of 98,8% and a specificity and sensitivity of a 99%. Finally, an analysis of the similarity with respect to the results with the manually handcrafted ground-truth have been conducted to validate the usability of the automatic method in further analysis of the abnormality.
Description
En col·laboració amb la Universitat de Barcelona (UB) i la Universitat Rovira i Virgili (URV)
SubjectsNeural networks (Computer science), Artificial intelligence, Machine learning, Xarxes neuronals (Informàtica), Intel·ligència artificial, Aprenentatge automàtic
DegreeMÀSTER UNIVERSITARI EN INTEL·LIGÈNCIA ARTIFICIAL (Pla 2012)
URIhttp://hdl.handle.net/2117/100815
Collections
Share: