Community network clouds as a case for the IEEE Intercloud standardization 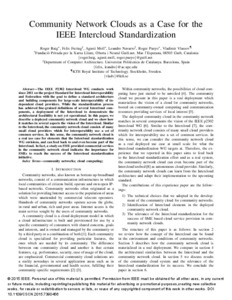 Vlassov, Vladimir
Document typeConference report
PublisherInstitute of Electrical and Electronics Engineers (IEEE)
Rights accessOpen Access
Abstract
The IEEE P2302 Intercloud WG conducts work since 2011 on the project Standard for Intercloud Interoperability and Federation with the goal to define a standard architecture and building components for large-scale interoperability of independent cloud providers. While the standardization process has achieved fine-grained definitions of several Intercloud components, a deployment of the Intercloud to demonstrate the architectural feasibility is not yet operational. In this paper, we describe a deployed community network cloud and we show how it matches in several aspects the vision of the Intercloud. Similar to the Intercloud, the community network cloud consists of many small cloud providers, which for interoperability use a set of common services. In this sense, the community network cloud is a real use case for elements that the Intercloud standardization WG envisions, and can feed back to and even become part of the Intercloud. In fact, a study on Small or Medium Enterprise (SME) provided commercial services in the community network cloud indicates the importance of the success of the Intercloud standardization initiative for SMEs.
CitationBaig, R., Freitag, F., Moll, A., Navarro, L., Pueyo, R., Vlassov, V. Community network clouds as a case for the IEEE Intercloud standardization. A: IEEE Conference on Standards for Communications and Networking. "2015 IEEE Conference on Standards for Communications and Networking (CSCN)". Tokyo: Institute of Electrical and Electronics Engineers (IEEE), 2015, p. 269-274.
URIhttp://hdl.handle.net/2117/100804
DOI10.1109/CSCN.2015.7390456
ISBN978-147998928-7
Publisher versionhttp://ieeexplore.ieee.org/xpl/articleDetails.jsp?arnumber=7390456
Collections
Share: