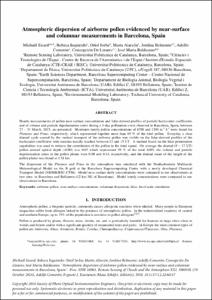 Document typeConference report
PublisherInternational Society for Photo-Optical Instrumentation Engineers (SPIE)
Rights accessOpen Access
All rights reserved. This work is protected by the corresponding intellectual and industrial property rights. Without prejudice to any existing legal exemptions, reproduction, distribution, public communication or transformation of this work are prohibited without permission of the copyright holder
Abstract
Hourly measurements of pollen near-surface concentration and lidar-derived profiles of particle backscatter coefficients and of volume and particle depolarization ratios during a 5-day pollination event observed in Barcelona, Spain, between 27 – 31 March, 2015, are presented. Maximum hourly pollen concentrations of 4700 and 1200 m-3 h-1 were found for Platanus and Pinus, respectively, which represented together more than 80 % of the total pollen. Everyday a clear diurnal cycle caused by the vertical transport of the airborne pollen was visible on the lidar-derived profiles of the backscatter coefficient with maxima usually reached between 12 and 15 UT. A method based on the lidar polarization capabilities was used to retrieve the contribution of the pollen to the total signal. On average the diurnal (9 – 17 UT) pollen aerosol optical depth (AOD) was 0.05 which represented 29 % of the total AOD, the volume and particle depolarization ratios in the pollen plume were 0.08 and 0.14, respectively, and the diurnal mean of the height of the pollen plume was found at 1.24 km. The dispersion of the Platanus and Pinus in the atmosphere was simulated with the Nonhydrostatic Multiscale Meteorological Model on the B grid at the Barcelona Supercomputing Center with a newly developed Chemical Transport Model (NMMB/BSC-CTM). Model near-surface daily concentrations were compared to our observations at two sites: in Barcelona and Bellaterra (12 km NE of Barcelona). Model hourly concentrations were compared to our observations in Barcelona.
CitationSicard, M., Izquierdo , R., Jorba i Casellas, O., Alarcón, M., Belmonte, J., Comerón, A., Linares, C., Baldasano, J. Atmospheric dispersion of airborne pollen evidenced by near-surface and columnar measurements in Barcelona, Spain. A: SPIE International Symposium on Remote Sensing: Conference on Remote Sensing of Clouds and the Atmosphere. "Remote Sensing of Clouds and the Atmosphere XXI". Edinburgh: International Society for Photo-Optical Instrumentation Engineers (SPIE), 2016, p. 1-11.
URIhttp://hdl.handle.net/2117/100763
DOI10.1117/12.2244517
ISBN9781510604063
Publisher versionhttp://proceedings.spiedigitallibrary.org/proceeding.aspx?articleid=2572147
Collections
Share: