Sharp isoperimetric inequalities via the ABP 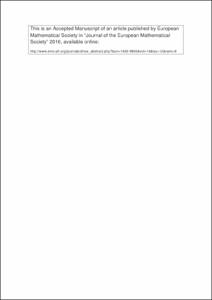 Ros-Oton, Xavier
Serra, Joaquim
Document typeArticle
Rights accessOpen Access
Abstract
Given an arbitrary convex cone of Rn, we find a geometric class of homogeneous weights for which balls centered at the origin and intersected with the cone are minimizers of the weighted isoperimetric problem in the convex cone. This leads to isoperimetric inequalities with the optimal constant that were unknown even for a sector of the plane. Our result applies to all nonnegative homogeneous weights in Rn satisfying a concavity condition in the cone. The condition is equivalent to a natural curvature-dimension bound and also to the nonnegativeness of a Bakry-Emery Ricci tensor. Even that our weights are nonradial, still balls are minimizers of the weighted isoperimetric problem. A particular important case is that of monomial weights. Our proof uses the ABP method applied to an appropriate linear Neumann problem. We also study the anisotropic isoperimetric problem in convex cones for the same class of weights. We prove that the Wulff shape (intersected with the cone) minimizes the anisotropic weighted perimeter under the weighted volume constraint. As a particular case of our results, we give new proofs of two classical results: the Wulff inequality and the isoperimetric inequality in convex cones of Lions and Pacella
CitationCabre, X., Ros-Oton, X., Serra, J. Sharp isoperimetric inequalities via the ABP. "Journal of the European Mathematical Society", 1 Gener 2016, vol. 18, núm. 12, p. 2971-2998.
URIhttp://hdl.handle.net/2117/100666
DOI10.4171/JEMS/659
ISSN1435-9855
Publisher versionhttp://www.ems-ph.org/journals/show_abstract.php?issn=1435-9855&vol=18&iss=12&rank=9
Collections
Share: