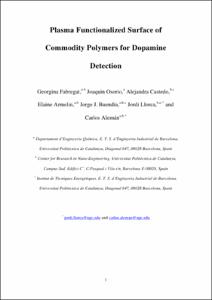 We have fabricated potentially generalizable sensors based on polymeric-modified electrodes for the electrochemical detection of dopamine. Sensitive and selective sensors have been successfully obtained by applying a cold-plasma treatment during 1–2 min not only to conducting polymers but also to electrochemically inert polymers, such as polyethylene, polypropylene, polyvinylpyrrolidone, polycaprolactone and polystyrene. The effects of the plasma in the electrode surface activation, which is an essential requirement for the dopamine detection when inert polymers are used, have been investigated using X-ray photoelectron spectroscopy. Results indicate that exposure of polymer-modified electrodes to cold-plasma produces the formation of a large variety of reactive species adsorbed on the electrode surface, which catalyse the dopamine oxidation. With this technology, which is based on the application of a very simple physical functionalization, we have defined a paradox-based paradigm for the fabrication of electrochemical sensors by using inert and cheap plastics.
CitationFabregat, G., Osorio-Madrigal, J., Castedo, A., Armelin, E., Buendía-Morales, J.J., Llorca, J., Aleman, C. Plasma functionalized surface of commodity polymers for dopamine detection. "Applied surface science", 31 Març 2017, vol. 399, p. 638-647.
URIhttp://hdl.handle.net/2117/100665
DOI10.1016/j.apsusc.2016.12.137
ISSN0169-4332
Publisher versionhttp://www.sciencedirect.com/science/article/pii/S0169433216328689?np=y