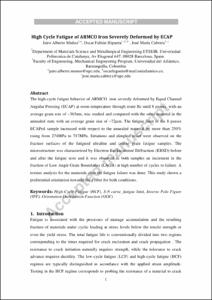 Document typeArticle
Rights accessOpen Access
Abstract
The high-cycle fatigue behavior of ARMCO iron severely deformed by Equal Channel Angular Pressing (ECAP) at room temperature through route Bc until 8 passes, with an average grain size of ~365 nm, was studied and compared with the same material in the annealed state with an average grain size of ~72 µm. The fatigue limit of the 8 passes ECAPed sample increased with respect to the annealed material by more than 250% rising from 274 MPa to 717 MPa. Striations and dimpled relief were observed on the fracture surfaces of the fatigued ultrafine and coarse grain fatigue samples. The microstructure was characterized by Electron Backscattered Diffraction (EBSD) before and after the fatigue tests and it was observed in both samples an increment in the fraction of Low Angle Grain Boundaries (LAGB) at high number of cycles to failure. A texture analysis for the materials after the fatigue failure was done. This study shown a preferential orientation towards the ¿ fiber for both conditions.
CitationMuñoz, J., Higuera, O., Cabrera, J. High cycle fatigue of ARMCO iron severely deformed by ECAP. "Materials science and engineering A. Structural materials properties microstructure and processing", 10 Gener 2017, vol. 681, p. 85-96.
URIhttp://hdl.handle.net/2117/100660
DOI10.1016/j.msea.2016.10.010
ISSN0921-5093
Publisher versionhttp://www.sciencedirect.com/science/article/pii/S0921509316312175
Collections
Share: