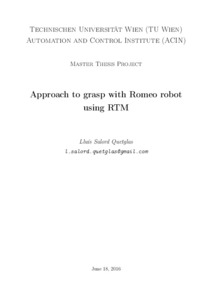 Romeo as humanoid robot, which has for main goal help people who has some kind of disability, needs to be capable to grasp objects. Considering that it has led to do this first approach to grasp with Romeo. Moreover, it is wanted to grasp object which has been recognised by the RTM software (Recognition, Tracking and Modelling Objects) with a Romeo camera or an external one. This approach is included in the ROS framework as an independent package named romeo_grasper whose code is free to be shared or improved. The general idea of the approach starts with the RTM software getting the position, on camera reference, of the object, which has to be previously modelled or at least in the database. Then, this pose is transformed on robot reference and sent to MoveIt, that combined with the Rviz simulator and some ROS packages for Romeo, moves the arm of the robot to an optimal position for the grasp. Currently, it is used the IK solver from the KDL library, but here it is also explained how has been tried to implement the IKFast solver on Romeo, but without success. Finally, it is achieved to make work together all the systems, but the grasp has a some imprecision, producing that sometime it cannot be accomplish. However, in the experiments, it has been discerned where this inaccuracy comes from and it has been proposed some ways to reduce it. Furthermore, some guidelines has been set to lead Romeo to achieve a grasp using machine learning and allowing it to accomplish its goal, help the ones who need it
SubjectsAutonomous robots, Androids--Design and construction, Robots autònoms, Androides -- Disseny i construcció
URIhttp://hdl.handle.net/2117/100621