Multifractality and autoregressive processes of dry spell lengths in Europe: an approach to their complexity and predictability 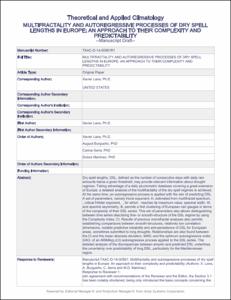 Dry spell lengths, DSL, defined as the number of consecutive days with daily rain amounts below a given threshold, may provide relevant information about drought regimes. Taking advantage of a daily pluviometric database covering a great extension of Europe, a detailed analysis of the multifractality of the dry spell regimes is achieved. At the same time, an autoregressive process is applied with the aim of predicting DSL. A set of parameters, namely Hurst exponent, H, estimated from multifractal spectrum, f(a), critical Hölder exponent, a0, for which f(a) reaches its maximum value, spectral width, W, and spectral asymmetry, B, permits a first clustering of European rain gauges in terms of the complexity of their DSL series. This set of parameters also allows distinguishing between time series describing fine- or smooth-structure of the DSL regime by using the complexity index, CI. Results of previous monofractal analyses also permits establishing comparisons between smooth-structures, relatively low correlation dimensions, notable predictive instability and anti-persistence of DSL for European areas, sometimes submitted to long droughts. Relationships are also found between the CI and the mean absolute deviation, MAD, and the optimum autoregressive order, OAO, of an ARIMA(p,d,0) autoregressive process applied to the DSL series. The detailed analysis of the discrepancies between empiric and predicted DSL underlines the uncertainty over predictability of long DSL, particularly for the Mediterranean region.
CitationLana, F.J., Burgueño, A., Serra, C., Martinez, M.D. Multifractality and autoregressive processes of dry spell lengths in Europe: an approach to their complexity and predictability. "Theoretical and applied climatology", Gener 2017, vol. 127, núm. 1, p. 285-303.
URIhttp://hdl.handle.net/2117/100607
DOI10.1007/s00704-015-1638-0
ISSN0177-798X
Publisher versionhttp://link.springer.com.recursos.biblioteca.upc.edu/article/10.1007/s00704-015-1638-0