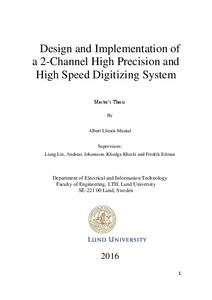 Show full item record
Llimós Muntal, Albert
Tutor / directorLiu, Liang; Johansson, Andreas; Kharki, Khadga; Edman, Fredrik
CovenanteeLunds universitet
Document typeMaster thesis
Rights accessOpen Access
Abstract
Recently, new spectroscopic techniques have been developed such as photocurrent detected two-dimensional spectroscopy [1], which measure the response from a sample that is excited by a high intensity laser pulses. The responses are linear and nonlinear signals that have very different amplitudes; the linear signal can be from 103 to 105 times larger than the nonlinear signal. These two signals have to be digitized and transferred to a computer to be able to isolate the photocurrent nonlinear signal. This requires analog to digital converters (ADC) with very high dynamic range. Some ADCs in the market meet these requirements but they can only sample one channel and this application requires two. Using two separate converters is not optimal due to phase delays in the sampling. Therefore, in this project, a two-channel high-speed and high-precision digitizing system is built. It is a complete system that includes both analog and digital hardware as well as software. It consists of two ADC boards that are controlled using a Field Programmable Gate Array (FPGA) included in an FPGA board. In order to communicate this modules, an interfacing board has been designed. The code elaborated in this project for the FPGA programming has been written in VSIC Hardware Description Language (VHDL). In order to control the data communication with the PC, a software interface application is developed. The digitizing system built can function at a sample rate up to 4MS/s and has a resolution of 23 bits. This system only uses one programmable module, which reduces its cost drastically compared to two separate one channel digitizing systems. The tests performed with the system demonstrate that even with just one programmable block, a high speed digitization and data transfer can be achieved. The data acquisition system is able to sample one million samples per channel per acquisition event in 780 ms. Moreover, it can sample up to 4MS per channel per acquisition event. It is worth mentioning that the phase delay between the two digitized signals is low, averaging 0,383°, with a standard deviation of 0,247°, which is below the maximum 1° allowed for this application. This high-speed and high-resolution system is not only suited for photocurrent spectroscopic applications but it can also result on the improvement of other systems like high end sound cards or ultrasound imaging.
SubjectsSpectrum analysis, Anàlisi espectral
DegreeMÀSTER UNIVERSITARI EN ENGINYERIA INDUSTRIAL (Pla 2014)
URIhttp://hdl.handle.net/2117/100593
Collections
Share: