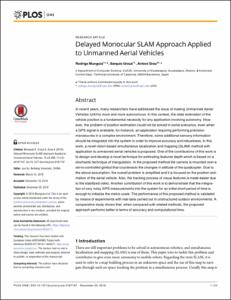 Document typeArticle
Rights accessOpen Access
European Commission's projectAEROARMS - AErial RObotic system integrating multiple ARMS and advanced manipulation capabilities for inspection and maintenance (EC-H2020-644271)
Abstract
In recent years, many researchers have addressed the issue of making Unmanned Aerial Vehicles (UAVs) more and more autonomous. In this context, the state estimation of the vehicle position is a fundamental necessity for any application involving autonomy. However, the problem of position estimation could not be solved in some scenarios, even when a GPS signal is available, for instance, an application requiring performing precision manoeuvres in a complex environment. Therefore, some additional sensory information should be integrated into the system in order to improve accuracy and robustness. In this work, a novel vision-based simultaneous localization and mapping (SLAM) method with application to unmanned aerial vehicles is proposed. One of the contributions of this work is to design and develop a novel technique for estimating features depth which is based on a stochastic technique of triangulation. In the proposed method the camera is mounted over a servo-controlled gimbal that counteracts the changes in attitude of the quadcopter. Due to the above assumption, the overall problem is simplified and it is focused on the position estimation of the aerial vehicle. Also, the tracking process of visual features is made easier due to the stabilized video. Another contribution of this work is to demonstrate that the integration of very noisy GPS measurements into the system for an initial short period of time is enough to initialize the metric scale. The performance of this proposed method is validated by means of experiments with real data carried out in unstructured outdoor environments. A comparative study shows that, when compared with related methods, the proposed approach performs better in terms of accuracy and computational time.
CitationMunguía, R.F., Urzua, S., Grau, A. Delayed monocular SLAM approach applied to unmanned aerial vehicles. "PLoS one", 29 Desembre 2016, vol. 11, núm. 12, p. 1-24.
URIhttp://hdl.handle.net/2117/100580
DOI10.1371/journal.pone.0167197
ISSN1932-6203
Publisher versionhttp://journals.plos.org/plosone/article?id=10.1371/journal.pone.0167197
Collections
Share: