Complexity of the behaviour of asphalt materials in cyclic testing 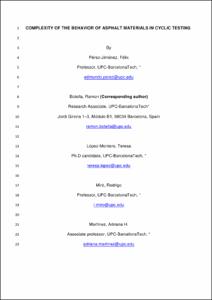 This paper compares the results obtained in two types of cyclic tension-compression tests, a time sweep test, constant strain amplitude, and a strain sweep test, increasing strain amplitude every 5000 cycles, called EBADE (standing for the Spanish words for strain sweep test). This comparison has shown that the rapid loss of stiffness during the initial part of cyclic testing is recoverable in bituminous materials. It has been found that reversible phenomena dominate in asphalt binders, while in mixtures are as important as damage. A damage equation has been proposed to describe the evolution of the material distress during the phase II in time sweep tests. In addition, a new methodology to estimate the fatigue law of bituminous mixtures is proposed.
CitationPerez, F., Botella, R., López-Montero, T., Miro, R., Martinez, A. Complexity of the behaviour of asphalt materials in cyclic testing. "International journal of fatigue", Maig 2017, núm. 98, p. 111-120.
URIhttp://hdl.handle.net/2117/100507
DOI10.1016/j.ijfatigue.2017.01.026
ISSN0142-1123
Publisher versionhttp://www.sciencedirect.com/science/article/pii/S0142112317300348