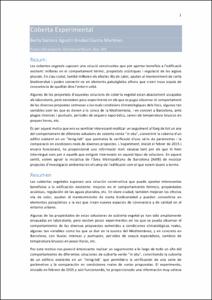 Except where otherwise noted, content on this work is licensed under a Creative Commons license : Attribution-NonCommercial-NoDerivs 3.0 Spain
Abstract
There are many advantages which green roofs can provide existing buildings, such as: improved thermal performance, sound insulation, rainfall regulation, etc. Furthermore, they also offer the city itself numerous benefits; reducing the urban heat island effect, maintaining biodiversity and creating new green spaces for the people living and working there. Many of the properties of these green roof solutions have already been extensively studied in laboratories, but there are few experiments in which the behaviour of the various types of green roofs are subjected to real weather conditions, which are as variable as those found in the Mediterranean basin, and specifically in Barcelona, with its intense rainfall, periods of sporadic drought and abrupt temperature changes over short periods of time. For this reason we thought it would be interesting to track the behaviour of different green roof solutions “in situ” over the period of a year, converting the existing building cover into a “living-lab” allowing the verification of a series of parameters and the comparison of the various proposals under real outdoor conditions. This ongoing investigation which started in February 2015, has provided valuable information to both those involved in the project and anyone else who might be interested in such a solution. We would like to thank the initiative of the “Área Metropolitana de Barcelona” (AMB) for supporting environmental research projects in the field of construction, such as the one we are carrying out.
Description
Article de difusió de l'experiment dut a terme a la Coberta de l'edifici Mercé Rodoreda de la Universitat Pompeu Fabra. Aquest experiment, consisteix en la instal·lació i monitorització durant un any de 9 mostres de cobertes verdes, per verificar el seu comportament.
CitationBosch, M., Sarroca, B., García, A. "Coberta Experimental". 2016.
URIhttp://hdl.handle.net/2117/100502
Collections
Share: