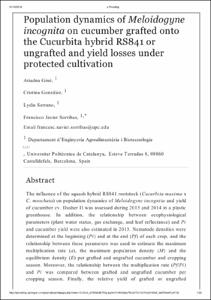 Document typeArticle
Rights accessOpen Access
ProjectEFECTO DE LA RESISTENCIA DE GENES R Y LA INDUCIDA POR HONGOS ENDOFITOS EN LA EPIDEMIOLOGIA DE MELOIDOGYNE Y LA PRODUCCION Y CALIDAD DE LA COSECHA EN SOLANACEAS-CUCURBITACEAS (MINECO-AGL2013-49040-C2-1-R)
Abstract
The influence of the squash hybrid RS841 rootstock (Cucurbita maxima x C. moschata) on population dynamics of Meloidogyne incognita and yield of cucumber cv. Dasher II was assessed during 2013 and 2014 in a plastic greenhouse. In addition, the relationship between ecophysiological parameters (plant water status, gas exchange, and leaf reflectance) and Pi and cucumber yield were also estimated in 2013. Nematode densities were determined at the beginning (Pi) and at the end (Pf) of each crop, and the relationship between these parameters was used to estimate the maximum multiplication rate (a), the maximum population density (M) and the equilibrium density (E) per grafted and ungrafted cucumber and cropping season. Moreover, the relationship between the multiplication rate (Pf/Pi) and Pi was compared between grafted and ungrafted cucumber per cropping season. Finally, the relative yield of grafted or ungrafted cucumber was plotted against Pi to determine the tolerance limit (T) and the minimum relative yield (m) by the Seinhorst damage function model. Values of a, M and E in grafted cucumber were higher than in ungrafted one irrespective of the cropping season. These results were supported by comparing the relationship between Pf/Pi and Pi between grafted and ungrafted cucumber. The relationship between Pi and yield fitted the Seinhorst damage function. The values of T and m did not differ between grafted and ungrafted each year. Predawn water potential, net photosynthetic rate, and leaf chlorophyll index decreased with increasing Pi. In addition, relative yield was related to variation in net photosynthetic rate and the leaf chlorophyll index. Under the conditions of this study, RS841 rootstock was neither resistant nor tolerant to M. incognita.
CitationGiné, A., Gonzalez, C., Serrano, L., Sorribas, F. Population dynamics of Meloidogyne incognita on cucumber grafted onto the Cucurbita hybrid RS841 or ungrafted and yield losses under protected cultivation. "European journal of plant pathology", 3 Gener 2017, p. 1-11.
URIhttp://hdl.handle.net/2117/100472
DOI10.1007/s10658-016-1135-z
ISSN0929-1873
Publisher versionhttp://link.springer.com/article/10.1007%2Fs10658-016-1135-z
Collections
Share: