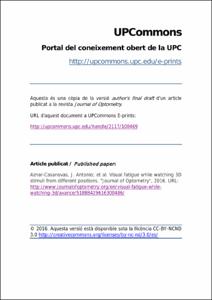 Martín Enrile, Pedro
Document typeArticle
PublisherElsevier
Rights accessOpen Access
Abstract
Purpose: When observers focus their stereoscopic visual system for a long time (e.g., watchinga 3D movie) they may experience visual discomfort or asthenopia. We tested two types ofmodels for predicting visual fatigue in a task in which subjects were instructed to discriminate between 3D characters. One model was based on viewing distance (focal distance, vergencedistance) and another in visual direction (oculomotor imbalance). Method: A 3D test was designed to assess binocular visual fatigue while looking at 3D stimuli located in different visual directions and viewed from two distances from the screen. The observers were tested under three conditions: (a) normal vision; (b) wearing a lens (-2 diop.);(c) wearing a base-out prism (2 ) over each eye. Sensitivity and specificity were calculated (asSignal Detection Theory parameters: SDT).Results: An ANOVA and SDT analyses revealed that impaired visual performance were directlyrelated to short distance and larger deviation in visual direction, particularly when the stimuli were located nearer and at more than 24¿to the centre of the screen in dextroversion and beyond. Conclusion: This results support a mixed model, combining a model based on the visual angle (related to viewing distance) and another based on the oculomotor imbalance (related to visualdirection). This mixed model could help to predict the distribution of seats in the cinemaroom ranging from those that produce greater visual comfort to those that produce more visual discomfort. Also could be a first step to pre-diagnosis of binocular vision disorders.
CitationAznar, J., Romeo, A., Torrents, A., Martín, P. Visual fatigue while watching 3D stimuli from different positions. "Journal of Optometry", vol. 10, núm. 3, p. 149-160.
URIhttp://hdl.handle.net/2117/100469
DOI10.1016/j.optom.2016.07.002
ISSN1888-4296
Collections
Share: