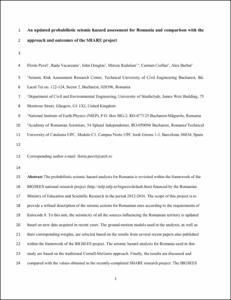 Document typeArticle
Rights accessOpen Access
Abstract
The probabilistic seismic hazard analysis for Romania is revisited within the framework of the BIGSEES national research project (http://infp.infp.ro/bigsees/default.htm) financed by the Romanian Ministry of Education and Scientific Research in the period 2012-2016. The scope of this project is to provide a refined description of the seismic action for Romanian sites according to the requirements of Eurocode 8. To this aim, the seismicity of all the sources influencing the Romanian territory is updated based on new data acquired in recent years. The ground-motion models used in the analysis, as well as their corresponding weights, are selected based on the results from several recent papers also published within the framework of the BIGSEES project. The seismic hazard analysis for Romania performed in this study are based on the traditional Cornell-McGuire approach. Finally, the results are discussed and compared with the values obtained in the recently completed SHARE research project. The BIGSEES and SHARE results are not directly comparable since the considered soil conditions are different-actual soil classes for BIGSEES and rock for SHARE. Nevertheless, the analyses of the seismic hazard results for 200 sites in Romania reveal considerable differences between the seismic hazard levels obtained in the present study and the SHARE results and point out the need for further analyses and thorough discussions related to the two seismic hazard models, especially in the light of a possible future harmonized hazard map for Europe.
CitationPavel, F., Vacareanu, R., Douglas, J., Radulian, M., Cioflan, C., Barbat, A. H. An updated probabilistic seismic hazard assessment for Romania and comparison with the approach and outcomes of the SHARE Project. "Pure and applied geophysics", 1 Juny 2016, vol. 173, núm. 6, p. 1881-1905.
URIhttp://hdl.handle.net/2117/100467
DOI10.1007/s00024-015-1223-6
ISSN0033-4553
Publisher versionhttp://link.springer.com/article/10.1007%2Fs00024-015-1223-6
Collections
Share: