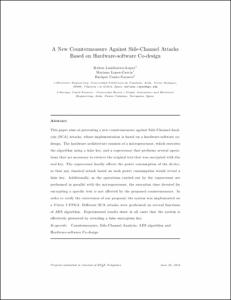 Cantó Navarro, Enrique
Document typeArticle
Rights accessOpen Access
Abstract
This paper aims at presenting a new countermeasure against Side-Channel Analysis (SCA) attacks, whose implementation is based on a hardware-software co-design. The hardware architecture consists of a microprocessor, which executes the algorithm using a false key, and a coprocessor that performs several operations that are necessary to retrieve the original text that was encrypted with the real key. The coprocessor hardly affects the power consumption of the device, so that any classical attack based on such power consumption would reveal a false key. Additionally, as the operations carried out by the coprocessor are performed in parallel with the microprocessor, the execution time devoted for encrypting a specific text is not affected by the proposed countermeasure. In order to verify the correctness of our proposal, the system was implemented on a Virtex 5 FPGA. Different SCA attacks were performed on several functions of AES algorithm. Experimental results show in all cases that the system is effectively protected by revealing a false encryption key.
CitationLumbiarres, R., Lopez, M., Cantó, E. A new countermeasure against side-channel attacks based on hardware-software co-design. "Microprocessors and microsystems", 1 Setembre 2016, vol. 45, núm. Part B, p. 324-338.
URIhttp://hdl.handle.net/2117/100465
DOI10.1016/j.micpro.2016.06.009
ISSN0141-9331
Publisher versionhttp://www.sciencedirect.com/science/article/pii/S014193311630076X
Collections
Share: