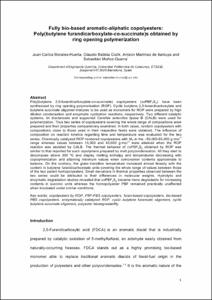 Document typeArticle
Rights accessOpen Access
Abstract
Poly(butylene 2,5-furandicarboxylate-co-succinate) copolyesters (coPBFxSy) have been synthesized by ring opening polymerization (ROP). Cyclic butylene 2,5-furandicarboxylate and butylene succinate oligomer mixtures, to be used as monomers for ROP, were prepared by high dilution condensation and enzymatic cyclization reactions, respectively. Two different catalytic systems, tin dioctanoate and supported Candida antarctica lipase B (CALB), were used for polymerization. Thus two series of copolyesters covering the whole range of compositions were prepared and their properties comparatively examined. In both cases, random copolyesters with compositions close to those used in their respective feeds were obtained. The influence of composition on reaction kinetics with respect to time and temperature was evaluated for the two series. Chemically catalyzed ROP rendered copolyesters with Mw in the ~50 000–65 000 g mol-1 range, whereas values between 15 000 and 45 000 g mol-1 were attained when the ROP reaction was assisted by CALB. The thermal behavior of coPBFxSy obtained by ROP was similar to that reported for such copolymers prepared by melt polycondensation. They all start to decompose above 300 °C and display melting enthalpy and temperatures that decrease with copolymerization, attaining minimum values when the comonomer contents are approximate to balance. On the contrary, the glass-transition temperature increased almost linearly with the content of butylene furandicarboxylate units, covering the whole range of values between those of the two parent homopolyesters. Small deviations in thermal properties observed between the two series could be attributed to their differences in molecular weights. Hydrolytic and enzymatic degradation studies revealed that coPBFxSy became more degradable with increasing content of succinic units, whereas the homopolyester PBF remained practically unaffected when incubated under similar conditions.
CitationMorales, J., Batista, C., Martinez de Ilarduya, A., Muñoz, S. Fully bio-based aromatic–aliphatic copolyesters: poly(butylene furandicarboxylate-co-succinate)s obtained by ring opening polymerization. "Polymer chemistry", 28 Gener 2017, vol. 8, núm. 4, p. 748-760.
URIhttp://hdl.handle.net/2117/100450
DOI10.1039/C6PY01879C
ISSN1759-9954
Publisher versionhttp://pubs.rsc.org/en/content/articlelanding/2017/py/c6py01879c#!divAbstract
Collections
Share: