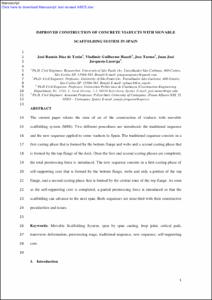 Jorquera Lucerga, Juan Jose
Document typeArticle
Rights accessOpen Access
Abstract
The current paper relates the state of the art of construction of viaducts with a movable scaffolding system (MSS). Two different procedures are introduced: the traditional sequence and the new sequence applied to some viaducts in Spain. The traditional sequence consists of two phases: first, concreting the bottom slab and webs, and then concreting the top slab of the deck. Once the first and second casting phases are completed, the total prestressing force is introduced. The new sequence consists of concreting a self-supporting core (i.e., the bottom slab, webs, and only a portion of the top slab). Once the self-supporting core has hardened, a partial prestressing force is introduced so that the scaffolding can be advanced to the next span; the central zone of the top slab is cast in a second phase. Both sequences are described here with their constructive peculiarities and issues.
CitationDiaz, J.R, Haach, V., Turmo, J., Jorquera, J. Improved construction of concrete viaducts with movable scaffolding systems in Spain. "ASCE. Journal of bridge engineering", Setembre 2016, vol. 21, núm. 9, p. 04016050-1-04016050-11.
URIhttp://hdl.handle.net/2117/100377
DOI10.1061/(ASCE)BE.1943-5592.0000831
ISSN1084-0702
Publisher versionhttp://ascelibrary.org/doi/10.1061/%28ASCE%29BE.1943-5592.0000831
Collections
Share: