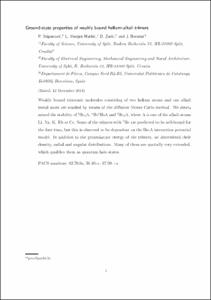 Document typeArticle
Rights accessOpen Access
Abstract
Weakly bound triatomic molecules consisting of two helium atoms and one alkali metal atom are studied by means of the diffusion Monte Carlo method. We determined the stability of 4He2A, 4He3HeA, and 3He2A, where A is one of the alkali atoms Li, Na, K, Rb, or Cs. Some of the trimers with 3He are predicted to be self-bound for the first time, but this is observed to be dependent on the He–A interaction potential model. In addition to the ground-state energy of the trimers, we determined their density, radial, and angular distributions. Many of them are spatially very extended, which qualifies them as quantum halo states
CitationStipanovic, P., Leandra, V., Zaric, D., Boronat, J. Ground-state properties of weakly bound helium-alkali trimers. "Journal of chemical physics", 7 Gener 2017, vol. 146, núm. 1, p. 1-19.
URIhttp://hdl.handle.net/2117/100340
DOI10.1063/1.4973381
ISSN0021-9606
Publisher versionhttp://aip.scitation.org/doi/10.1063/1.4973381
Collections
Share: