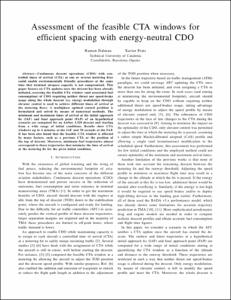 Except where otherwise noted, content on this work is licensed under a Creative Commons license : Attribution-NonCommercial-NoDerivs 3.0 Spain
Abstract
Continuous descent operations (CDO) with con- trolled times of arrival (CTA) at one or several metering fixes could enable environmentally friendly procedures at the same time that terminal airspace capacity is not compromised. This paper focuses on CTA updates once the descent has been already initiated, assessing the feasible CTA window (and associated fuel consumption) of CDO requiring neither thrust nor speed-brake usage along the whole descent (i.e. energy modulation through elevator control is used to achieve different times of arrival at the metering fixes). A multiphase optimal control problem is formulated and solved by means of numerical methods. The minimum and maximum times of arrival at the initial approach fix (IAF) and final approach point (FAP) of an hypothetical scenario are computed for an Airbus A320 descent and starting from a wide range of initial conditions. Results show CTA windows up to 4 minutes at the IAF and 70 seconds at the FAP. It has been also found that the feasible CTA window is affected by many factors, such as a previous CTA or the position of the top of descent. Moreover, minimum fuel trajectories almost correspond to those trajectories that minimise the time of arrival at the metering fix for the given initial condition
CitationDalmau, R., Prats, X. Assessment of the feasible CTA windows for efficient spacing with energy-neutral CDO. A: International Conference on Research in Air Transportation. "Proceedings of the 7th International Conference on Research in Air Transportation". Philadelphia: 2016.
URIhttp://hdl.handle.net/2117/100328
Collections
Share: