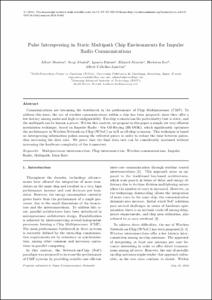 Document typeArticle
Rights accessOpen Access
Abstract
Communications are becoming the bottleneck in the performance of Chip Multiprocessor (CMP). To address this issue, the use of wireless communications within a chip has been proposed, since they offer a low latency among nodes and high reconfigurability. The chip scenario has the particularity that is static, and the multipath can be known a priori. Within this context, we propose in this paper a simple yet very efficient modulation technique, based on Impulse Radio-On–Off-Keying (IR-OOK), which significantly optimizes the performance in Wireless Network-on-Chip (WNoC) as well as off-chip scenarios. This technique is based on interspersing information pulses among the reflected pulses in order to reduce the time between pulses, thus increasing the data rate. We prove that the final data rate can be considerably increased without increasing the hardware complexity of the transceiver.
CitationMestres, A., Abadal, S., Llatser, I., Alarcon, E., Lee, H., Albert Cabellos-Aparicio. Pulse interspersing in static multipath chip environments for Impulse Radio communications. "Nano communication networks", 1 Setembre 2016, vol. 9, p. 1-6.
URIhttp://hdl.handle.net/2117/100213
DOI10.1016/j.nancom.2016.05.002
ISSN1878-7789
Publisher versionhttp://www.sciencedirect.com/science/article/pii/S1878778916300163
Collections
Share: