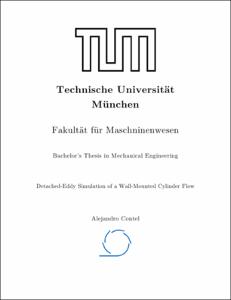 CovenanteeTechnische Universität München
Document typeBachelor thesis
Rights accessOpen Access
Abstract
The aim of this project is to study the effect of different turbulence models on the detachment point on the cylinder surface and the vortex shedding frequencies. The turbulence models considered are Spallart-Allmaras DDES, kw-SST DDES, Spallart- Allmaras IDDES and kw-SST IDDES, being the two last ones an improved formulation of the currently used DES model. In order to perform this study, OpenFOAM, the CFD Open Source tool has been used. To do the meshing, the snappyHexMesh tool is the one considered. Since a suitable computational grid needs to be built, an in-depth study on the meshing configuration has been also held and the grid convergence is shown for certain configurations. The simulation results cover several magnitudes, such as the drag coefficient, the detachment point and the frequencies of oscillations in the wake of the cylinder as well as on its surface. To validate those results, a literature research prior to running the simulations has been performed, so that they can be easily compared and proved.
SubjectsTurbulent boundary layer--Mathematical models, Turbulència -- Models matemàtics
URIhttp://hdl.handle.net/2117/100205
Collections
Share: