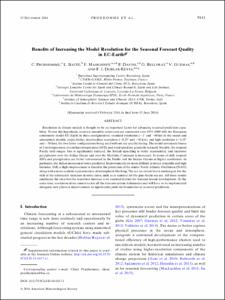 Benefits of Increasing the Model Resolution for the Seasonal Forecast Quality.pdf (4,110Mb)
Share:

Document typeArticle
PublisherAmerican Meteorological Society
Rights accessOpen Access
All rights reserved. This work is protected by the corresponding intellectual and industrial property rights. Without prejudice to any existing legal exemptions, reproduction, distribution, public communication or transformation of this work are prohibited without permission of the copyright holder
ProjectPRIMAVERA - PRocess-based climate sIMulation: AdVances in high resolution modelling and European climate Risk Assessment (EC-H2020-641727)
IMPREX - IMproving PRedictions and management of hydrological EXtremes (EC-H2020-641811)
COGNAC - Readdressing Convective-Surface Interaction in Global Climate Models (EC-H2020-654942)
Abstract
Resolution in climate models is thought to be an important factor for advancing seasonal prediction capability. To test this hypothesis, seasonal ensemble reforecasts are conducted over 1993–2009 with the European community model EC-Earth in three configurations: standard resolution (~1° and ~60 km in the ocean and atmosphere models, respectively), intermediate resolution (~0.25° and ~60 km), and high resolution (~0.25° and ~39 km), the two latter configurations being used without any specific tuning. The model systematic biases of 2-m temperature, sea surface temperature (SST), and wind speed are generally reduced. Notably, the tropical Pacific cold tongue bias is significantly reduced, the Somali upwelling is better represented, and excessive precipitation over the Indian Ocean and over the Maritime Continent is decreased. In terms of skill, tropical SSTs and precipitation are better reforecasted in the Pacific and the Indian Oceans at higher resolutions. In particular, the Indian monsoon is better predicted. Improvements are more difficult to detect at middle and high latitudes. Still, a slight improvement is found in the prediction of the winter North Atlantic Oscillation (NAO) along with a more realistic representation of atmospheric blocking. The sea ice extent bias is unchanged, but the skill of the reforecasts increases in some cases, such as in summer for the pan-Arctic sea ice. All these results emphasize the idea that the resolution increase is an essential feature for forecast system development. At the same time, resolution alone cannot tackle all the forecast system deficiencies and will have to be implemented alongside new physical improvements to significantly push the boundaries of seasonal prediction.
CitationProdhomme, Chloé [et al.]. Benefits of Increasing the Model Resolution for the Seasonal Forecast Quality in EC-Earth. "Journal of Climate", 5 Desembre 2016, vol. 29, p. 9141-9162.
URIhttp://hdl.handle.net/2117/100174
DOI10.1175/JCLI-D-16-0117.1
ISSN0894-8755
Publisher versionhttp://journals.ametsoc.org/doi/abs/10.1175/JCLI-D-16-0117.1
Collections
Share: