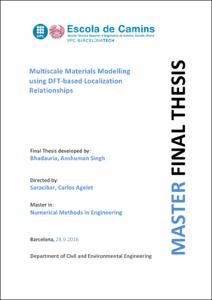 Document typeMaster thesis
Rights accessOpen Access
Abstract
Multiscale modelling is the need of the hour, and this can be con rmed from the fact that several initiatives have been taken to bring together researchers from di erent domains by formation of projects like Integrated Computational Materials Engineering (ICME), Materials Genome Initiative etc. This increasing interest can be pertained to the fact that there is a need for creating new materials with desired e ective properties for new applications like Additive Manufacturing (AM). Until recently the discovery of new materials was based on empirical methods of trial and error, which takes roughly twenty years to bring in a new material into manufacturing. Therefore, it is important to address these two difficult problems. First is Multiscale modelling, which enables communication between constitutive models at di erent length scales, thus improving accuracy of failure predictions and second, is Accelerated Material Discovery, which can reduce the development time of new materials with desired properties. As it turns out, both these problems are closely related and can be addressed simultaneously. The key to success in both these areas is making problem solving data driven, i.e., convertint these non-trivial problems Big Data friendly so that the techniques from Data Science can be used for building scalable, robust and computationally efficient solutions. Another good reason to use data science for these problems is that it makes data reusable i.e., data that was produced during solution of one problem can be used in solving another problem by establishing syntactic material databases, where not only e ective properties but also the internal structure of the materials is readily available. In this thesis, one such mathematical framework called Material Knowledge Systems (MKS) is used to solve both the above mentioned problems. MKS is derived from the Statistical Continuum theories, and has been successfully implemented in real world problems. MKS is based on the rigorous mathematical framework called Material Sensitive Design (MSD), which is further derived from generalized homogenization theories. MSD provides a rigorous methodology for quanti cation of the internal structure of the material, which spans multiple length and time scales with a microstructure function . But the biggest achievement of MSD is that it allows us to incorporate the n-point spatial correlations in the homogenization theories. Also it addresses the problem of localization, which has been under addressed as compared to the homogenization problems. The use of n-point spatial correlations to represent the internal structure of the material is very rigorous, thus, the amount of structural information is substantially large. To deal with this increased amount of information, dimensional reduction techniques like Principal Component Analysis, Naive Bayes etc., from the eld of Data Science. Using these techniques, the material designer can not only visualize the structure-property linkages, but can also begin to solve the inverse problem of creating microstructures using hybrid processes which exhibit the desired effective properties. These linkages are also called Property-Structure-Process (PSP) relations. Establishment of such PSP linkages will change the way how materials are created in the future.
Description
With the tremendous amount of research done in the field of numerical methods for engineering the number of possible applications as well as users have drastically increased. However, mostly these tools have been developed independently for solving problems of a particular kind, by particular methods on a particular scale, which leads to some limitations. One of these limitations, interoperability, will be dealt with in this thesis and a methodology to resolve it for a small use-case of finite element problems at a continuum scale will be proposed.
SubjectsMultiscale modeling, Microstructure, Modelització multiescala, Microestructura
URIhttp://hdl.handle.net/2117/100130
Collections
Share: