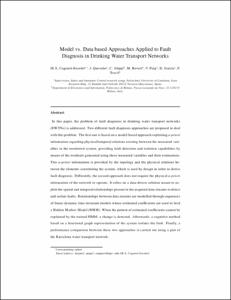 García Valverde, Diego
Trovò, F
Document typeArticle
Rights accessOpen Access
European Commission's projectEFFINET - Efficient Integrated Real-time Monitoring and Control of Drinking Water Networks (EC-FP7-318556)
Abstract
In this paper, the problem of fault diagnosis in drinking water transport networks (DWTNs) is addressed. Two different fault diagnosis approaches are proposed to deal with this problem. The first one is based on a model-based approach exploiting a-priori information regarding physical/temporal relations existing between the measured variables in the monitored system, providing fault detection and isolation capabilities by means of the residuals generated using these measured variables and their estimations. This a-priori information is provided by the topology and the physical relations between the elements constituting the system, which is used by design in order to derive fault diagnosis. Differently, the second approach does not require the physical a-priori information of the network to operate. It relies on a data-driven solution meant to exploit the spatial and temporal relationships present in the acquired data streams to detect and isolate faults. Relationships between data streams are modelled through sequences of linear dynamic time-invariant models whose estimated coefficients are used to feed a Hidden Markov Model (HMM). When the pattern of estimated coefficients cannot be explained by the trained HMM, a change is detected. Afterwards, a cognitive method based on a functional graph representation of the system isolates the fault. Finally, a performance comparison between these two approaches is carried out using a part of the Barcelona water transport network.
CitationCugueró, M., Quevedo, J., Alippi, C., Roveri, M., Puig, V., García, D., Trovò, F. Model- vs. data-based approaches applied to fault diagnosis in potable water supply networks. "Journal of hydroinformatics", 10 Maig 2016, vol. 18, núm. 5, p. 831-850.
URIhttp://hdl.handle.net/2117/100093
DOI10.2166/hydro.2016.218
ISSN1464-7141
Publisher versionhttp://jh.iwaponline.com/
Collections
Share: