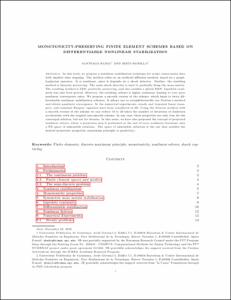 In this work, we propose a nonlinear stabilization technique for scalar conservation laws with implicit time stepping. The method relies on an artificial diffusion method, based on a graph-Laplacian operator. It is nonlinear, since it depends on a shock detector. Further, the resulting method is linearity preserving. The same shock detector is used to gradually lump the mass matrix. The resulting method is LED, positivity preserving, and also satisfies a global DMP. Lipschitz continuity has also been proved. However, the resulting scheme is highly nonlinear, leading to very poor nonlinear convergence rates. We propose a smooth version of the scheme, which leads to twice differentiable nonlinear stabilization schemes. It allows one to straightforwardly use Newton’s method and obtain quadratic convergence. In the numerical experiments, steady and transient linear transport, and transient Burgers’ equation have been considered in 2D. Using the Newton method with a smooth version of the scheme we can reduce 10 to 20 times the number of iterations of Anderson acceleration with the original non-smooth scheme. In any case, these properties are only true for the converged solution, but not for iterates. In this sense, we have also proposed the concept of projected nonlinear solvers, where a projection step is performed at the end of every nonlinear iterations onto a FE space of admissible solutions. The space of admissible solutions is the one that satisfies the desired monotonic properties (maximum principle or positivity).
CitationBadia, S., Bonilla, J. Monotonicity-preserving finite element schemes based on differentiable nonlinear stabilization. "Computer methods in applied mechanics and engineering", Gener 2017, vol. 313, p. 133-158.
URIhttp://hdl.handle.net/2117/100080
DOI10.1016/j.cma.2016.09.035
ISSN0045-7825
Publisher versionhttp://www.sciencedirect.com/science/article/pii/S0045782516306405