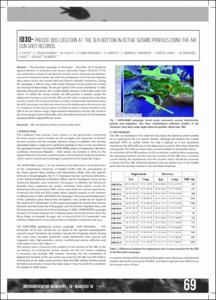 The Norcaribe campaign, in November – December 2013, funded by Spanish Ministry of Innovation and Science (Norcaribe Project CGL2010-17715), was performed on board of the Spanish research vessel “Sarmiento de Gamboa” around the Hispaniola island, also with the participation of the Dominic Republic Navy patrol vessels and several Haiti and Dominic Republic institutions. During the campaign, a 200 km long, wide-amgle refraction seismic profile was carried out crossing the Beata ridge. The air gun signal (5100 ci) was recorded by 15 OBSs deployed along the seismic line in water depths between 2.300 meters and 4.320 meters. To obtain the section records, the OBS position is needed, usually the deployment location is used, but the OBS can drift while is sinking due to the deep oceanic currents. The recovery locations at surface could provide information about the drift, assuming a constant sea current since the deployment to the recovery, but it is imprecise. In this work we show a method to obtain a precise location of the OBS at the sea bottom using a high-resolution bathymetry and the OBS record of the closest air gun shots of the profile. Also, the preliminary results for the Norcaribe campaign (Beata ridge profile) are shown.
CitationPazos, A. [et al.]. Precise OBS location at the sea bottom in active seismic profiles using the air gun shot records. A: 7th International Workshop on Marine Technology : MARTECH 2016. "Instrumentation viewpoint". Vilanova i la Geltrú: SARTI, 2016, p. 69-71.
URIhttp://hdl.handle.net/2117/100028
DLB-32814-2006
ISSN1886-4864