Development of a prototype for submarine communications in shallow waters 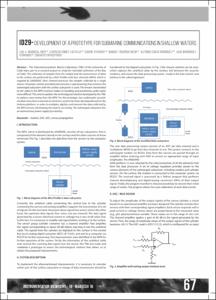 Show full item record
Mariscal Rico, Luis A.
Gómez Castillo, Leopoldo
Rychkov, Eugene
Figueroa Recio, Manuel
Corzo Rodríguez, Alfonso
Bohórquez Ferrando, Julio
Papaspyrou, Sokratis
Document typeConference lecture
PublisherSARTI
Rights accessOpen Access
Abstract
The Telecommunications Marine Laboratory (TML) of the University of Cádiz takes part in a research project to study the intertidal sediments of the Bay of Cádiz. The collection of samples from the seabed and the transmission of data to the surface are performed by a Mini Profiler with four channels (MP4), which is supplied by UNISENSE. Each channel processes the samples collected by a single sensor. For power, control, and data transmission, a special wiring that connects the submerged subsystem with the surface subsystem is used. The tension transmitted by the cable to the MP4 structure makes its handling and positioning under water more difficult. This article explains the technological solution developed by the TML to replace some wiring from the MP4. For the prototype, two underwater acoustic modems have been used and an electronic system has been developed based on the Arduino platform, in order to multiplex, digitize, and transmit the data collected by the MP4 sensors, eliminating the need to use wiring. The submerged subsystem has an autonomous power supply by a battery.
Location
1: Espanya
CitationMariscal Rico, Luis A. [et al.]. Development of a prototype for submarine communications in shallow waters. A: 7th International Workshop on Marine Technology : MARTECH 2016. "Instrumentation viewpoint". Vilanova i la Geltrú: SARTI, 2016, p. 67-68.
URIhttp://hdl.handle.net/2117/100024
DLB-32814-2006
ISSN1886-4864
Collections
Share: