The good, the bad and the ugly: The shifting ethical stance of Malaysian consumers 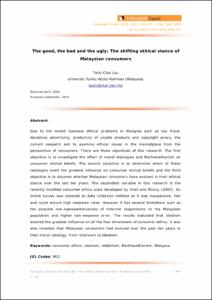 Show full item record
Lau, Teck-Chai
Document typeArticle
PublisherIntangible Capital
Rights accessOpen Access
Abstract
Due to the recent business ethical problems in Malaysia such as tax fraud, deceptive advertising, production of unsafe products and copyright piracy, the current research aim to examine ethical issues in the marketplace from the perspective of consumers. There are three objectives of this research. The first objective is to investigate the effect of moral ideologies and Machiavellianism on consumer ethical beliefs. The second objective is to determine which of these ideologies exert the greatest influence on consumer ethical beliefs and the third objective is to discover whether Malaysian consumers have evolved in their ethical stance over the last ten years. The dependent variable in this research is the recently modified consumer ethics scale developed by Vitell and Muncy (2005). An online survey was adopted as data collection method as it was inexpensive, fast and could ensure high response rates. However it has several limitations such as the possible non-representativeness of Internet respondents to the Malaysian population and higher non-response error. The results indicated that idealism exerted the greatest influence on all the four dimensions of consumer ethics. It was also revealed that Malaysian consumers had evolved over the past ten years in their moral ideology: from relativism to idealism.
CitationLau, Teck-Chai. The good, the bad and the ugly: The shifting ethical stance of Malaysian consumers. "Intangible Capital", Abril 2010, vol. 6, núm. 2, p. 236-257.
URIhttp://hdl.handle.net/2099/9367
ISSN1697-9818
Collections
Share: