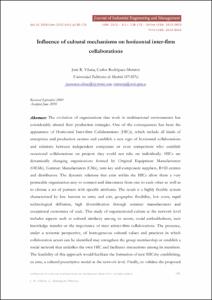 Except where otherwise noted, content on this work is licensed under a Creative Commons license : Attribution-NonCommercial 3.0 Spain
Abstract
The evolution of organizations that work in multinational environments has considerably altered their production strategies. One of the consequences has been the appearance of Horizontal Inter-firm Collaborations (HICs), which include all kinds of enterprises and production centres and establish a new type of horizontal collaborations and relations between independent companies or even competitors who establish occasional collaborations on projects they could not take on individually. HICs are dynamically changing organizations formed by Original Equipment Manufacturers (OEMs), Contract Manufacturers (CMs), turn-key and component suppliers, R+D centres and distributors. The dynamic relations that exist within the HICs allow them a very permeable organization easy to connect and disconnect from one to each other as well as to choose a set of partners with specific attributes. The result is a highly flexible system characterized by low barriers to entry and exit, geographic flexibility, low costs, rapid technological diffusion, high diversification through contract manufacturers and exceptional economies of scale. This study of organizational culture at the network level includes aspects such as cultural similarity among its actors, social embeddedness, tacit knowledge transfer or the importance of trust atinter-firm collaborations. The presence, under a systemic perspective, of homogeneous cultural values and practices in which collaboration actors can be identified may strengthen the group membership or establish a social network that underlies the own HIC and facilitates interactions among its members. The feasibility of this approach would facilitate the formation of new HICsby establishing, ex ante, a cultural prescriptive model at the network level. Finally, to validate the proposed model, the case methodology have been applied to an example within the aeronautical industry that has been one of the most successful relationships within HICs, the collaboration between GE and SNECMA for the CFM 56 engine manufacturing.
CitationVilana, José Ramón; Rodríguez-Monroy, Carlos. Influence of cultural mechanisms on horizontal inter-firm collaborations. "Journal of Industrial Engineering and Management", Juny 2010, vol. 3, núm. 1, p. 138-175.
URIhttp://hdl.handle.net/2099/9218
DLB-28744-2008
ISSN2013-0953
Collections
Share: