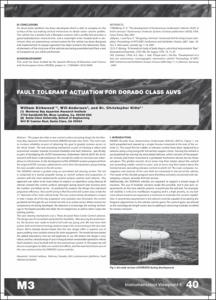 This paper describes a new control surface actuating design for the Monterey Bay Aquarium Research Institute (MBARI) Dorado class AUVs. The intent was to increase reliability as part of obtaining the goal to greatly increase access to the Arctic Ocean. The new actuating mechanism is part of creating a robust and economical solution towards increased reliability and fault tolerance. Specifically, as part of developing the ALTEX Autonomous Underwater Vehicle (AUV) for Arctic research with basin scale endurance, the concept for under ice missions was redundancy in critical areas. As the development of the DORADO systems progressed from the original ALTEX concepts, added drivers came from the operations group looking for more useable volume in the aft section. The DORADO vehicle is guided using an articulated tail steering section. The tail is comprised of a ducted propeller acting as control surfaces and propulsion, in contrast with the more traditional fin control surfaces used by most vehicles. This approach was taken to be more robust to impacts as experience using Odyssey IB vehicles showed the control surfaces damaged during launch and recovery were the number one failure by far. As predicted by analysis the design also improved propulsion efficiency. Also worth noting is that this entire tail system stays inside the 21” diameter of the main vehicle body. The new system being developed is unique in that it keeps all of the key propulsion and actuators but eliminates the current gimbaled tail through the use of what we refer to as a false center. While several new components are being developed, the objective is to leverage the existing technology to the degree possible and allow for an inexpensive as well as direct swap into existing systems. The new steering mechanism uses a Three Actuator False Center Control solution. The design was first modeled and tested for feasibility. After passing the preliminaries, the decision was made to build a full-scale sea going unit. We now have that system built and in bench testing, ready to swap in for at sea testing in the very near future. We’ve already demonstrated that the new design offers a superior use of space yielding more useable volume for other equipment. The model demonstrated the added redundancy that we will duplicate at sea. We believe the design is very robust and has a broad range of uses in long duration unattended operations where fault situations must be dealt with by the autonomous system. In this paper we will discuss our progress to date, our current test efforts, and the near term future uses of this new control section for DORADO science vehicles.
CitationKirkwood, William; Will, Anderson; Kitts, Christopher. Fault tolerant actuation for dorado class, AUVS.. "Instrumentation Viewpoint", 10 Març 2010, núm. 8, p. 40-42.
URIhttp://hdl.handle.net/2099/8605
ISSN1886-4864