The Ictineu 3 project: A modern manned submersible for scientific research and intervention. 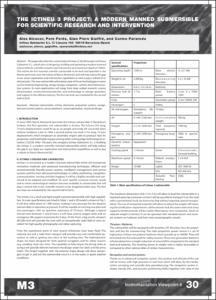 Show full item record
Alcocer Peñas, Álex
Forès i Malleu, Pere
Giuffré, Gian Piero
Parareda, Carme
Document typeArticle
PublisherSARTI (Technological Development Centre of Remote Acquisition and Data processing Systems)
Rights accessOpen Access
Abstract
This paper describes the current state of Ictineu 3, the first project of Ictineu Submarins S.L., which aims at designing, building and operating a modern manned submersible for scientific research and intervention at a maximum depth of 1200m. This will be the first manned scientific submersible to be built and operated in the Iberian peninsula since the Ictíneo of Narcís Monturiol, and will help reduce the gap in our ocean exploration and intervention capabilities as well as pay a tribute to its old ancestor. This new submersible will employ state of the art technologies in areas such as material engineering, energy storage, navigation, control, and communication systems. Its main applications will range from deep seabed research, science dissemination, environmental protection, and archaeology to salvage operations and support to the offshore industry. The first sea trials are scheduled for the second half of 2010.
CitationAlcocer, Alex [et al.]. The Ictineu 3 project: A modern manned submersible for scientific research and intervention.. "Instrumentation Viewpoint", 4 Març 2010, núm. 8, p. 30-31.
URIhttp://hdl.handle.net/2099/8598
ISSN1886-4864
Collections
Share: