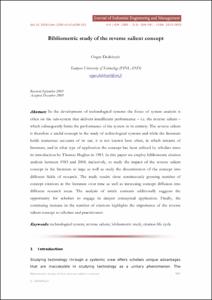 Except where otherwise noted, content on this work is licensed under a Creative Commons license : Attribution-NonCommercial 3.0 Spain
Abstract
In the development of technological systems the focus of system analysis is often on the sub-system that delivers insufficient performance – i.e. the reverse salient – which subsequently limits the performance of the system in its entirety. The reverse salient is therefore a useful concept in the study of technological systems and while the literature holds numerous accounts of its use, it is not known how often, in which streams of literature, and in what type of application the concept has been utilized by scholars since its introduction by Thomas Hughes in 1983. In this paper we employ bibliometric citation analysis between 1983 and 2008, inclusively, to study the impact of the reverse salient concept in the literature at large as well as study the dissemination of the concept into different fields of research. The study results show continuously growing number of concept citations in the literature over time as well as increasing concept diffusion into different research areas. The analysis of article contents additionally suggests the opportunity for scholars to engage in deeper conceptual application. Finally, the continuing increase in the number of citations highlights the importance of the reverse salient concept to scholars and practitioners
CitationDedehayir, Ozgur. Bibliometric study of the reverse salient concept. "Journal of Industrial Engineering and Management", 2009, vol. 2, núm. 3, p. 569-591.
URIhttp://hdl.handle.net/2099/8490
DLB-28744-2008
ISSN2013-0953
Collections
Share: