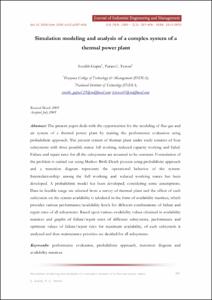 Show full item record
Gupta, Sorabh
Tewari, Puran C.
Document typeArticle
PublisherSchool of Industrial and Aeronautic Engineering of Terrassa (ETSEIAT). Universitat Politècnica de Catalunya (UPC)
Rights accessOpen Access
Abstract
The present paper deals with the opportunities for the modeling of flue gas and air system of a thermal power plant by making the performance evaluation using probabilistic approach. The present system of thermal plant under study consists of four subsystems with three possible states: full working, reduced capacity working and failed. Failure and repair rates for all the subsystems are assumed to be constant. Formulation of the problem is carried out using Markov Birth-Death process using probabilistic approach and a transition diagram represents the operational behavior of the system. Interrelationship among the full working and reduced working states has been developed. A probabilistic model has been developed, considering some assumptions. Data in feasible range are selected from a survey of thermal plant and the effect of each subsystem on the system availability is tabulated in the form of availability matrices, which provides various performance/availability levels for different combinations of failure and repair rates of all subsystems. Based upon various availability values obtained in availability matrices and graphs of failure/repair rates of different subsystems, performance and optimum values of failure/repair rates for maximum availability, of each subsystem is analyzed and then maintenance priorities are decided for all subsystems.
CitationGupta, Sorabh; Tewari, Puran C.. Simulation modeling and analysis of a complex system of a thermal power plant. "Journal of Industrial Engineering and Management", Setembre 2009, vol. 2, núm. 2, p. 387-406.
URIhttp://hdl.handle.net/2099/8239
DLB-28744-2008
ISSN2013-0953
Collections
Share: