Analysis of gender differences in the perception of properties: an application for differential semantics 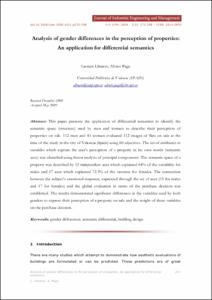 Except where otherwise noted, content on this work is licensed under a Creative Commons license : Attribution-NonCommercial 3.0 Spain
Abstract
This paper presents the application of differential semantics to identify the semantic space (structure) used by men and women to describe their perception of properties on sale. 112 men and 43 women evaluated 112 images of flats on sale at the time of the study in the city of Valencia (Spain) using 60 adjectives. The set of attributes or variables which capture the user’s perception of a property in his own words (semantic axes) was identified using factor analysis of principal components. The semantic space of a property was described by 15 independent axes which explained 64% of the variability for males and 17 axes which explained 72.3% of the variance for females. The connection between the subject’s emotional response, expressed through the set of axes (15 for males and 17 for females) and the global evaluation in terms of the purchase decision was established. The results demonstrated significant differences in the variables used by both genders to express their perception of a property on sale and the weight of these variables on the purchase decision.
CitationLlinares Millán, Mª Carmen; Page, Alvaro. Analysis of gender differences in the perception of properties: an application for differential semantics. "Journal of Industrial Engineering and Management", Juny 2009, vol. 2, núm. 1, p. 273-298.
URIhttp://hdl.handle.net/2099/8230
DLB-28744-2008
ISSN2013-0953
Collections
Share: