Progress in airline distribution systems: the threat of new entrants to incumbent players 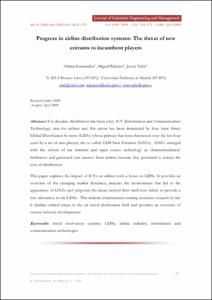 Except where otherwise noted, content on this work is licensed under a Creative Commons license : Attribution-NonCommercial 3.0 Spain
Abstract
For decades, distribution has been a key ICT (Information and Communication Technology) area for airlines and this sector has been dominated by four (now three) Global Distribution Systems (GDSs) whose primacy has been threatened over the last four years by a set of new players, the so called GDS New Entrants (GNEs). GNEs emerged with the advent of the Internet and open source technology as ‘disintermediation’ facilitators and generated vast interest from airlines because they promised to reduce the cost of distribution. This paper explores the impact of ICTs on airlines with a focus on GDSs. It provides an overview of the changing market dynamics, analyses the environment that led to the appearance of GNEs and pinpoints the issues behind their until now failure to provide a true alternative to the GDSs. This analysis complements existing academic research in that it clarifies critical issues in the air travel distribution field and provides an overview of current industry developments
CitationSismanidou, Athina; Palacios, Miguel; Tafur, Javier. Progress in airline distribution systems: the threat of new entrants to incumbent players. "Journal of Industrial Engineering and Management", Juny 2009, vol. 2, núm. 1, p. 251-272.
URIhttp://hdl.handle.net/2099/8229
DLB-28744-2008
ISSN2013-0953
Collections
Share: