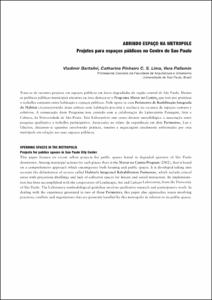 Show full item record
Bartalini, Vladimir
Lima, Catharina Pinheiro C.S.
Pallamin, Vera
Document typeArticle
PublisherEscola Tècnica Superior d'Arquitectura del Vallès. Universitat Politècnica de Catalunya (UPC).
Rights accessOpen Access
Abstract
This paper focuses on recent urban projects for public spaces found in degraded quarters of São Paulo downtown. Among municipal actions for such places there is the Morar no Centro Program (2002), that is based on a comprehensive approach which encompasses both housing and public spaces. It is developed taking into account the delimitation of sectors called Habitat’s Integrated Rehabilitation Perimeters, which include critical areas with precarious dwellings and lack of collective spaces for leisure and social interaction. Its implementation has been accomplished with the cooperation of Landscape, Art and Culture Laboratory, from the University of São Paulo. The Laboratory methodological guideline involves qualitative research and participatory work. In dealing with the experience generated in two of those Perimeters, this paper also approaches issues involving practices, conflicts and negotiations that are presently handled by this metropolis in relation to its public spaces.
URIhttp://hdl.handle.net/2099/802
ISSN1695-534X
Collections
Share: