Human-Centred Design: sustainable ideas and scenarios for the development of projects and products based on knowledge and human abilities 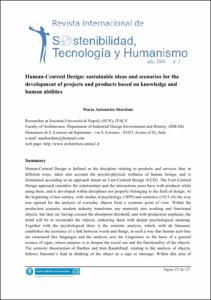 Show full item record
Sbordone, Maria Antonietta
Document typeArticle
Rights accessOpen Access
Abstract
Human-Centred Design is defined as the discipline relating to products and services that, in different ways, takes into account the psycho-physical wellness of human beings, and is formulated according to an approach based on User-Centred Design (UCD). The User-Centred Design approach considers the relationships and the interactions users have with products while using them, and is developed within disciplines not properly belonging to the field of design. At the beginning of last century, with studies in psychology (1899) and semiotics (1913-16) the way was opened for the analysis of everyday objects from a systemic point of view. Within the production scenario, modern industry transforms any materials into working and functional objects, but later on, having crossed the absorption threshold, and with production surpluses, the trend will be to reconsider the objects, endowing them with deeper psychological meaning. Together with the psychological there is the semiotic analysis, which, with de Saussure, establishes the existence of a link between words and things, in such a way that human activities are structured like languages and the analysis sees the Linguistics as the basis of a general science of signs, whose purpose is to deepen the social use and the functionality of the objects. The semiotic theorization of Barthes and then Baudrillard, relating to the analysis of objects, follows Saussure’s lead in thinking of the object as a sign or message. Within this area of semiotic analysis, divergent positions from different thought’ schools follow one after the other. Among these, we find Jean Baudrillard’s (1968) and Charles Sanders Pierce’s (2001); both, however, agree on various points: on the determination of the systemic and therefore relational character of the objects, and on the understanding of the mechanisms which are the basis of perceptive judgments, as well as the related elaborations which structure our consciousness (C.S. Pierce), and which come together as a frame of reference in the User-Centred Design approach. Psychology has recently found in Donald A. Norman - the director of the Cognitive Science Society at the University of California, a psychologist with an international reputation for his studies on “short term memory” and contemporary cognitive psychology - a supporter of the analysis of the learning processes. Moreover, his research on memory has a particular bearing on the creation and function of artificial intelligence, highlighted in a theory on the processes of elaboration of data by the brain known as “human information processing”. He orients his studies within the area of “cognitive science” and hypothesizes on the errors due to the appearance incompatibility conditions between man and the environment. In addition to this, cognitive psychology, which has dealt with this subject for more than fifty years, has contributed decisively to the current ergonomic study on the man-machine relationship in terms of User-Centred Design.
CitationSbordone, Maria Antonietta."Human-Centred Design: sustainable ideas and scenarios for the development of projects and products based on knowledge and human abilities". Revista Internacional de Sostenibilidad, Tecnología y Humanismo, diciembre 2008, núm. 3, p. 127-144.
URIhttp://hdl.handle.net/2099/7080
ISSN1988-0928
Collections
Share: