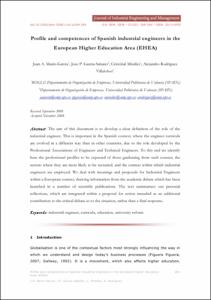 The aim of this document is to develop a clear definition of the role of the industrial engineer. This is important in the Spanish context, where the engineer curricula are evolved in a different way than in other countries, due to the role developed by the Professional Associations of Engineers and Technical Engineers. To this end we identify here the professional profiles to be expected of those graduating from such courses, the sectors where they are most likely to be recruited, and the context within which industrial engineers are employed. We deal with meanings and proposals for Industrial Engineers within a European context, drawing information from the academic debate which has been launched in a number of scientific publications. The text summarizes our personal reflections, which are integrated within a proposal for action intended as an additional contribution to the critical debate as to the situation, rather than a final response
CitationMarin-Garcia, J.A.; et al. Profile and competences of Spanish industrial engineers in the European Higher Education Area (EHEA). Journal of Industrial Engineering and Management, 2008, v.1, n.2, p. 269-284
URIhttp://hdl.handle.net/2099/7075
DLDL: B-28744-2008
ISSN2013-0953