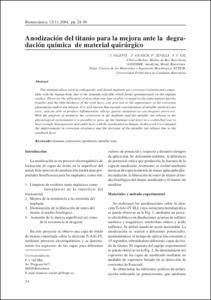 Except where otherwise noted, content on this work is licensed under a Creative Commons license : Attribution-NonCommercial-NoDerivs 2.5 Spain
Abstract
The titanium alloys used in orthopaedic and dental implants are corrosion-resistant and compatible with the human body due to the titanium oxid film which forms spontaneously on the implant surface. However, the utilization of more than one type of alloy or metal on the same patient and the fragility and the thin thickness of the oxid layer, can give rise to the appearance of the corossion phenomena and/or ion release. It is well known that enough concentration of metallic particles are toxic, and are able to produce lnflammation, allergy genetic mutations or carcinogenic processes. With the purpose of minimize the corrossion in the implants and the metallic ion release to the physiological environment it is possible to grow up the titanium oxid layer in a controlled way to have a tough, homogeneous and stable layer with the anodization technique. In this work it is evaluated the improvements in corrosion resistance and the decrease of the metallic ion release due to the anodized layer.
URIhttp://hdl.handle.net/2099/6846
DOI10.5821/sibb.v12i1.1718
ISSN1885-9518
Collections
Share: