Traditional techniques of water management: a new model for sustainable landscape and town 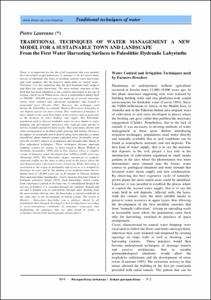 Show full item record
Laureano, Pietro
Document typeArticle
PublisherEscola Tècnica Superior d'Arquitectura del Vallès. Universitat Politècnica de Catalunya (UPC)
Rights accessOpen Access
Abstract
Water is so important for the life of all organisms that even animals have developed useful behaviours to manage it. In the desert many species of mammals dig holes to facilitate natural water harvesting and some animals, like the beavers, build dams to control water. Therefore, it is not surprising that the first hominids built surfaces and dikes for water harvesting. The most archaic structure of this kind that has been identified so far could be that found in the site of Isernia, exactly in La Pineta area, where a paleosurface dating back to 700,000 - 500,000 years ago was made up of several travertine stones, bone remains and calcareous handmades that formed a primordial layer (Peretto 1991). However, the techniques used during the Paleolithic by nomadic Hunters-Harvesters belonging to our Sapiens species are more certain. They could move from place to place thanks to the good knowledge of the territory and in particular of the methods of water findings and supply. The Paleolithic population used to harvest drinkable water in caves thanks to water dripping and percolation; moreover, they realized stone paving to harvest rainfalls and divert them to pits. They used dams, ditches and stone arrangement to facilitate plant growing and fishing (Drower). In steppes, in savannahs and in deserts along karst plateaux or along interfluvial plains human groups exploited those favourable areas near the territory subject to swampiness and drought alike thanks to flow adjustment techniques. These techniques became imposing trapping systems for fishing as those found in Mount William in Australia (Lourandos 1980) and in New Guinea where a complex system of draining canals developed from 9,000 to 6,000 years ago (Diamond 1997). The labyrinthic shapes reproduced in symbolic rupestral graffiti are the same as those used in the fences where the first domestication experiences were carried out. Water harvesting is associated to the origin of spirituality and of art as it is testified by drawings in caves and by the finding of an artificial stone barrow dating back to 150,000 years ago in El Guettar in Tunisia, holding flints and paleolithic handmades, clearly showing functions linked to hydraulic practices (Gruet 1955). Such knowledge, which results from experiences gained in the long run, is consolidated through the success of holders; it is recorded through the symbolic thought and art and is handed over to generations through tales. Starting from the most archaic African sites, the knowledge is spread worldwide at the same time as the development of human groups. The system of Hunters - Harvesters knowledge was a sublayer shared by all populations that changed, developed or lost its importance according to socio-environment conditions. It sometimes reemerged, thus highlighting the analogies that are often found in myths, in techniques and in forms among people and far places.
URIhttp://hdl.handle.net/2099/583
ISSN1695-534X
Collections
Share: