Cooperative inquiry for learning and connectedness 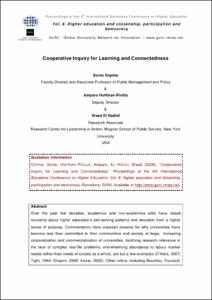 Show full item record
Ospina, Sonia
Hoffman-Pinilla, Amparo
El Hadidi, Waad
Document typeArticle
PublisherGlobal University Network for Innovation (GUNI)
Rights accessOpen Access
Abstract
Over the past few decades, academics and non-academics alike have raised concerns about higher education’s self-serving patterns and deviation from a higher sense of purpose. Commentators have exposed reasons for why universities have become less than committed to their communities and society at large; increasing corporatization and commercialization of universities, declining research relevance in the face of complex real-life problems, overwhelming attendance to labour market needs rather than needs of society as a whole, are but a few examples (O’Hara, 2007; Tight, 1994; Shapiro, 2005; Kezar, 2005). Other critics, including Bourdieu, Foucault, and Derrida have focused on the role of higher education in perpetuating social hierarchies through control over knowledge and entitled claims to the ‘Truth’ (Deer, 2003).
CitationGlobal University Network for Innovation (GUNI)
URIhttp://hdl.handle.net/2099/5810
Collections
Share: