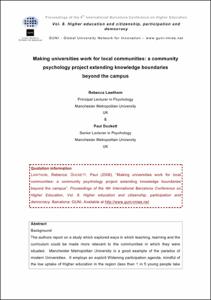 The authors report on a study which explored ways in which teaching, learning and the curriculum could be made more relevant to the communities in which they were situated. Manchester Metropolitan University is a good example of the paradox of modern Universities. It employs an explicit Widening participation agenda, mindful of the low uptake of Higher education in the region (less than 1 in 5 young people take up University places). It wants to extend the ‘campus’ out to communities which it serves. Indeed, Manchester as a large Northern city has many wards with high deprivation indices, high unemployment and poor health outcomes. The University ‘corridor’, comprising Manchester Metropolitan University and University of Manchester is a high income generating area in Manchester. However, half a mile either side of this University corridor lies areas of high deprivation, for example, two areas in Manchester register in the top ten deprivation areas. There is much urban regeneration and Manchester is called a ‘Knowledge capital’. How can we make the ‘academy’ both more accessible and more relevant to its geographical constituency and members?
CitationGlobal University Network for Innovation (GUNI)
URIhttp://hdl.handle.net/2099/5809