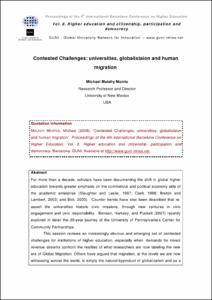 Show full item record
Malahy Morris, Michael
Document typeArticle
PublisherGlobal University Network for Innovation (GUNI)
Rights accessOpen Access
Abstract
For more than a decade, scholars have been documenting the shift in global higher education towards greater emphasis on the commercial and political economy side of the academic enterprise (Slaughter and Leslie, 1997; Clark, 1998; Breton and Lambert, 2003; and Bok, 2003). Counter trends have also been described that re-assert the universities historic civic missions, through new ventures in civic engagement and civic responsibility. Benson, Harkavy, and Puckett (2007) recently explored in detail the 20-year journey of the University of Pennsylvania’s Center for Community Partnerships. This session reviews an increasingly obvious and emerging set of contested challenges for institutions of higher education, especially when demands for mixed revenue streams confront the realities of what researchers are now labeling the new era of Global Migration. Others have argued that migration, at the levels we are now witnessing across the world, is simply the natural byproduct of globalization and as a complex phenomenon it is unlikely to end in this century and maybe ever, becoming accepted as a permanent part of human history. (See, for example, the personal essay by Morris Fahrl entitled “All History is the History of Migration” in Eurozine (2007) which expounds on this argument).
CitationGlobal University Network for Innovation (GUNI)
URIhttp://hdl.handle.net/2099/5806
Collections
Share: