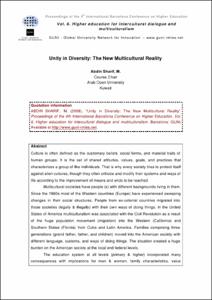 Culture is often defined as the customary beliefs, social forms, and material traits of human groups. It is the set of shared attitudes, values, goals, and practices that characterizes a group of like individuals. That is why every society tries to protect itself against alien cultures, though they often criticize and modify their systems and ways of life according to the improvement of means and ends to be reached. Multicultural societies have people (s) with different backgrounds living in them. Since the 1960s most of the Western countries (Europe) have experienced sweeping changes in their social structures. People from ex-colonial countries migrated into those societies (legally & illegally) with their own ways of doing things. In the United States of America multiculturalism was associated with the Civil Revolution as a result of the huge population movement (migration) into the Western (California) and Southern States (Florida) from Cuba and Latin America. Families comprising three generations (grand father, father, and children) moved into the American society with different language, customs, and ways of doing things. The situation created a huge burden on the American society at the local and federal levels.
CitationGlobal University Network for Innovation (GUNI)
URIhttp://hdl.handle.net/2099/5772