The role of universities in peacebuilding processes in contexts of armed conflict: The experience of the Universidad de Bogotá Jorge Tadeo Lozano in Colombia 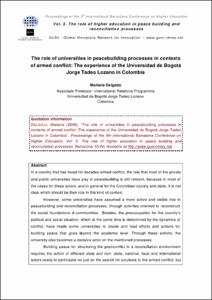 Show full item record
Delgado, Mariana
Document typeArticle
PublisherGlobal University Network for Innovation (GUNI)
Rights accessOpen Access
Abstract
In a country that has faced for decades armed conflict, the role that most of the private and public universities have play in peacebuilding is still reticent, because in most of the cases for these actors, and in general for the Colombian society and state, it is not clear which should be their role in this kind of context. However, some universities have assumed a more active and visible role in peacebuilding and reconciliation processes, through activities oriented to reconstruct the social foundations of communities. Besides, the preoccupation for the country’s political and social situation, which at the same time is determined by the dynamics of conflict, have made some universities to create and lead efforts and actions for building peace that goes beyond the academic level. Through these actions, the university also becomes a decisive actor on the mentioned processes.
CitationGlobal University Network for Innovation (GUNI)
URIhttp://hdl.handle.net/2099/5766
Collections
Share: