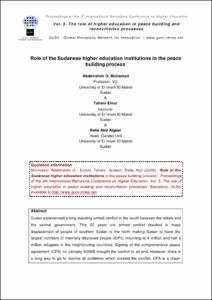 Show full item record
Mohamed, Abdelrahim O.
Elnur, Tahani
Abd Algbar, Rafia
Document typeArticle
PublisherGlobal University Network for Innovation (GUNI)
Rights accessOpen Access
Abstract
Sudan experienced a long standing armed conflict in the south between the rebels and the central government. This 22 years old armed conflict resulted in mass displacement of people of southern Sudan to the north making Sudan to have the largest numbers of internally displaced people (IDPs) mounting to 4 million and half a million refugees in the neighbouring countries. Signing of the comprehensive peace agreement (CPA) on January 9/2005 brought the conflict to an end. However, there is a long way to go to resolve all problems which created the conflict. CPA is a major challenge to the civil society especially institutions of higher education in both south and northern Sudan for peace building and democratic transformation. Self determination referendum of the southern people which will take place at the end of the interim period in 2011 is both an opportunity and challenge to our country. Another armed conflict suddenly erupted in Darfur region in 2003. This time all the leaders of the conflict are newer graduates of the Sudanese higher education system. The leaders of the recent conflict unlike the southern one are young, inexperienced, and fierce. A peace agreement has been forced in by the international community in Abuja in July 2005 called Darfur peace agreement (DPA). This peace agreement has recognized the need for affirmative action to upgrade the communities in Darfur with fair share in political and economic revenues. However, only one faction of the rebels signed and a large number of the fighting groups did not sign and continued hostilities. Another round of negotiations is underway but those negotiators of the rebels do not follow any reasoning during process, on the contrary stick onto very controversial points. Another peace agreement has been signed between the government and rebels of Eastern Sudan in May 2006. The peace agreement of eastern Sudan focused onto solving political, social, cultural and economic divide between the different regions of the Sudan. The latter two agreements recognize the unity and sovereignty of the country and have no mention for self determination or referendum.
CitationGlobal University Network for Innovation (GUNI)
URIhttp://hdl.handle.net/2099/5763
Collections
Share: