The challenge of gender in higher education: processes and practices 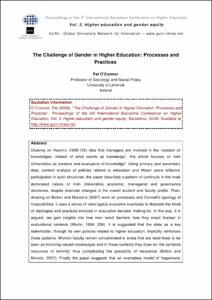 Drawing on Hearn’s (1999:125) idea that managers are involved in the ‘creation of knowledges…indeed of what counts as knowledge’, this article focuses on Irish Universities as creators and evaluators of knowledge’. Using primary and secondary data, content analysis of policies related to education and fifteen years reflexive participation in such structures, the paper describes a pattern of continuity in the male dominated nature of Irish Universities academic, managerial and governance structures, despite dramatic changes in the overall student and faculty profile. Then, drawing on Bolton and Munzio’s (2007) work on processes and Connell’s typology of masculinities, it uses a series of ideal typical evocative examples to illustrate the kinds of ideologies and practices involved in evaluative decision making for. In this way, it is argued, ‘we gain insights into how men ‘erect’ barriers, how they enact ‘biaises’ in evaluational contexts (Martin, 1996: 206). It is suggested that the state as a key stakeholder, through its own policies related to higher education, implicitly reinforces these patterns. Women faculty remain concentrated in areas that are least likely to be seen as involving valued knowledges and in these contexts they draw on ‘the symbolic resources of feminity’ thus complicating the possibility of resistance (Bolton and Munzio, 2007). Finally the paper suggests that an exemplary model of hegemonic masculinity revolving around science and technology, is being replaced by a managerialist model, although the ideology of male superiority exists.
CitationGlobal University Network for Innovation (GUNI)
URIhttp://hdl.handle.net/2099/5744